How to overcome a depressive state without medication?

This article was created to share my testimony of healing depression. Before telling you my story, I would like to point out that I am neither a doctor, nor a psychologist, nor a psychiatrist and even less a psychotherapist. On the other hand, I know perfectly well their way of proceeding and I frequented them for some time years ago. This site is meant to be an alternative, and that is to say it offers you a path totally different from what we can offer you "officially."

I would NEVER say that at the time, right in the heart of the psychic storm, but cure of deep depression is easy, and to overcome a depressive state without medication is quite possible! The only requirement is to know exactly what to do and by which way to go. Unfortunately, no one was there to show it to me at the time, but you are lucky because I will explain MY way through the story that follows. You will also discover how you too can overcome this depressive state forever. The goal is obviously to live fully the life that is offered to us everyday, to live it with a fresh look, full of joy, happiness and love. Are you motivated? So, let's go! 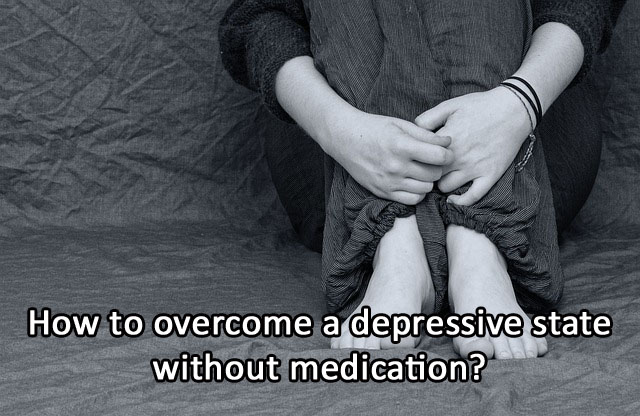 Overcome the inner malaise without medication!

It was at the age of 16 that everything began ... As I emerged from a seemingly happy childhood, a deep feeling of unease was preparing in the background of my conscience. I was not yet awake enough at the time to understand the magnitude of the situation that was preparing. Then, almost overnight, my psychic stability literally crumbled. I still remember exactly the day this happened. I was completely surprised and helpless.

In a few days, a deep inner pain came to the surface and exploded literally to leave only sobs and pain within my innermost being. Quickly, my entourage decided to treat me. After a visit to the doctor, I ended up in the office of a psychiatrist. In just 10 minutes, I came out with a prescription for medication. Quickly, my condition stabilized and I found exactly my apparent well-being from before, but I felt that we had just covered the boiling pot with a lid. Certainly, I was able to blow thanks to the anti-depressant drugs, but quickly, I decided to stop. Indeed, I felt like living on the surface of the earth, I no longer felt the happiness in my home, and in esoteric terms, I would gladly say that I was cut off from my heart chakra. I no longer felt the negative emotions like I used to in the past, but the positives were also trapped. I secretly decided to stop the medications myself.

Major depressive state, what to do?

Soon, the symptoms of intense depression came back again. To alleviate the inner suffering of this deep malaise, I found refuge in over-sport, festive alcohol and cigarettes. An explosive cocktail that allowed me to "support" somehow this depressed state. However, in parallel, I was greatly obsessed with my natural healing. I knew I would not stay long with such an unhealthy lifestyle. I absolutely had to find the solution to all my problems. Indeed, not only was I depressed, but in addition, it had led to a lot of health problems: digestive problems, permanent anxiety, weight gain in the stomach, hypertension, etc.

For several years, in parallel with a somewhat chaotic life, I experimented with many alternative therapies, healing methods, healthy diets, special emotional release techniques, meditation, and so on. All this always led to a slight improvement, but he remained on the surface. I felt that suffering was still rumbling in my soul.

Then, I discovered yoga and more precisely breathing. Quickly, I realized that breathing was the key that would get me out of depression permanently, naturally and without medication.

My testimony of natural healing from depression

Breath was the icing on the cake, it really is what allowed me to conquer once and for all the depression that struck me. But that would never have been possible without some mandatory preliminaries. Indeed, as you will discover soon how to cure the intense depression, it is necessary to attack the problem from several different angles.

First, healing is only possible if our minds allow it. It's a nuance that took me years to fully understand and integrate. I wanted intensely to cure my depression, but at the same time in a natural way, I fought against it, I pushed it back, I resisted it, I did everything to keep it away. It was a constant struggle, a fierce struggle, an incessant mental war, a conflict in the head! My dreams (nightmares) themselves testified to the violence of psychic combat: wars, heavy artillery, terrifying monsters, bloody battles, and so on.

Today, it makes me laugh, but at that time, this great inner fight that was taking place in my head was destroying me slowly. Then one day, I was so exhausted psychically that I made the decision to stop the fight. Mentally, I laid down my arms. I remember saying to myself, "OK, you won, I stop the fight, do what you want with me." It's called letting go...

To cure depression, life forced me to let go, I was forced to accept depression as part of me at this time. To accept and let go seemed so simple in theory... Fortunately, it happened to me. I accepted the suffering, I lived it intensely without resistance: sobs, tremors, chills, nightmares, crying, etc. Whenever it "went up," I said inside; "It's ok, I accept, I do not want to fight anymore, welcome to you Madam depression." What happened next is quite simple: in a few months, the psychic instability disappeared completely. I was finally free. (On the other hand, letting go does not work if one takes medication, one must live entirely and exteriorize one's suppressed emotions).

Second, I had to completely review my diet. I then discovered that I had been prescribed anti-depressant medications that regulated the level of serotonin (a hormone of well-being). Guess where  more than 95% of serotonin is produced? In the intestines! But that's not all, the intestines also produce 50% of dopamine (happiness hormone). Clearly, if you do not fit well in the head, it is that you are not well in the belly. By healing your intestines, by recreating a healthy intestinal flora, you regulate serotonin and dopamine for yourself, and happiness is back naturally.

The major causes of my depression were repetitive antibiotics, industrial sugar (how to stop sugar) and tap water (chlorine). All 3 have a powerful effect on the intestines: they literally destroy our intestinal flora, and harm our production of hormones of happiness and well-being. The healing of my intestines and the normalization of my intestinal flora have really restored my total psychic and emotional stability. Hippocrates, the father of medicine, said: "the disease begins in the intestine." Depression too ... I would add: "Disease and depression also end up in the gut." This is where we will digest everything: food as emotions...

Finally, after letting go  the mind of psychic and physical healing of the intestine, I had to do energy work. We all have an invisible energy envelope around the body. This is called vital energy, which is neither more nor less than the vibratory frequency of the static electricity that passes through our body. Our nervous system circulates electrical impulses between the neurons to make the organs work effectively. It may sound esoteric, but it has been scientifically proven.

After healing my mind and body I had to increase my vital energy level, which is the electrical charge that goes through my nervous system to improve the functioning of my body and thus, improve my health so as to increase my daily shape. This was only possible thanks to the breathing. Clearly, it's the breathing that has finally freed me from depression. It was the final blow, the K.O. Be careful, do not use breathing against depression, you will be resisting a part of yourself again. Before you let go, accept depression, do not resist, and then learn to breathe well to increase your energy level. The nuance is essential because if you want to learn to breathe to overcome depression, this positioning of spirit in resistance will never work!

What to do to get out of deep depression?

It is very simple. I invite you to read each page on the site to understand the alternative path that I propose to you. Information is disseminated everywhere. On the Depression Symptoms Page, you will discover that the major symptom of depression is lack of vital energy, fatigue. Vital energy is what creates the positive inner "pressure." Without energy, it's the DEPRESSION.

Then, on the Causes of Depression page, you will find out that the main cause is still the lack of vital energy. As a result of this, anything that steals our energy and causes fatigue is a potential cause of the depressive state. Finally, on the page on how to cure depression, to repeat myself, you will not be surprised (e) to learn that the only solution is to increase its vital energy. To do this, we will act on our 3 bodies: the psychic body (the spirit) by letting go (no resistance / acceptance), the physical body (the intestine) by eliminating all the energy-stealing foods and by privileging a "living" food, and finally the energetic body (breathing) by learning to  breathe WELL for 24 hours a day and not just for a few minutes of deep breathing exercises here and there, which between us will have no real effect.

Letting go, feeding and breathing, here is the trilogy that allowed me to totally cure my severe depression of adolescence and live today a happy and peaceful life. I hope that your testimony inspired you and instilled courage to choose the path of regeneration. The promise is to live a truly happy and serene life. In any case, that's all I wish you!

Previous article : How to overcome fear in 3 steps?